So, This Week Happened...

We went to the aquarium yesterday with my handicapped brother: 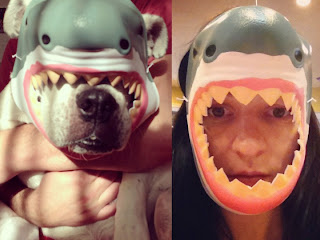 The dog was not amused by my new shark mask.  At any rate, Utah's Living Planet Aquarium is really rather impressive... and they have otters!!! And sharks, a sea turtle, rays, penguins, fish of all sorts and sizes, a giant octopus I named George, and a really amazing Amazon wing.  The anaconda used to be just a little nugget and he's gotten so big!  For as long as I can remember they had rays in their "petting zoo", but they've switched it up.  Now they have starfish, leopard sharks, and two types of smaller rays to pet.  We had a blast with until we had a major flat on the way home.  We were driving my mother's car.  Her spare was even flatter than our flat, which we learned after changing the tire.  So, we changed it back and drove slowly until the 5th gas station we reached.  The prior four didn't even have an air pump- well one was out of service- but, seriously?!

That evening we left my brother home alone for the evening- he likes to have the house to himself on Saturday nights and the dogs are there to protect him- and headed out to the season opener for Ballet West where we had spectacular seats.  The ballet makes my soul sing!  We've seen "Bolero" before and it was fabulous to see it again.  "The Lottery" was superb and I was on the verge of tears (joyful tears) during most of "But Never Doubt I Love".

In college I was considered a good dancer.  But not a GREAT dancer.  The one thing everyone could agree on, however, was that I had "amazing" feet.  This has been both a blessing and a curse.  It left me incapable of watching the ballet without obsessing over the dancers' feet.  I have to give props to Xtend Barre.  I've been working so hard on my overall form that I actually watched the dancers overall this time.  And it was glorious.

Whenever we stay with my brother, I stock up on this at their neighborhood grocery store (for some reason mine doesn't carry it): 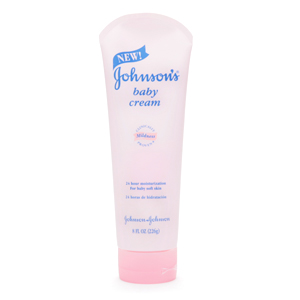 When it comes to my skin allergies, my legs often get it the worst.  This stuff is a Godsend!!!  I had been using Johnson's Baby Lotion prior to this, but it just isn't that hydrating.  Also, I had only been using it for a couple of years.  Previously it contained a preservative that I am deadly allergic to, but they got their act together and stopped putting any quaternium compounds in their products.  The point is, that this is super moisturizing, smells like heaven, and it's super cheap.  I am concerned about my hands though.  I've read that you should follow your facial routine on your hands because they really show signs of aging.  Ummmm... I cannot afford to be wiping Crème de la Mer on my hands, people!  I can't really afford to use it on my face either, but I have a way of making things happen when I need to.  I know my Johnson's Baby Cream is helping, but I wonder if there is something better.  I have to be extra careful with what I put on my hands because they are the most prone to giant allergy induced eczema breakouts.  And I am incredibly prone to scratching them open until they're bloody.  How gross is that? Is there a hand treatment that you swear by?

And now we've reached THIS WEEK FOR DINNER: 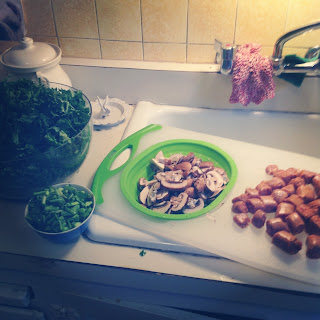 Monday: Kale, Sausage, and mushroom stew with garlic bread.  Next time I would leave out the kale stems and use ground sausage, but it was delicious. 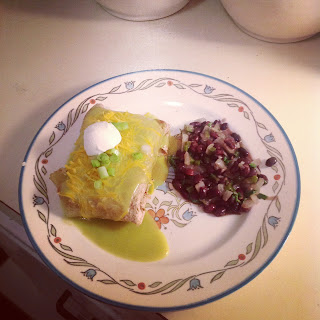 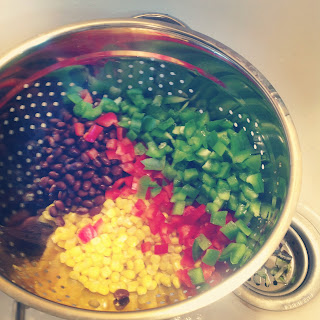 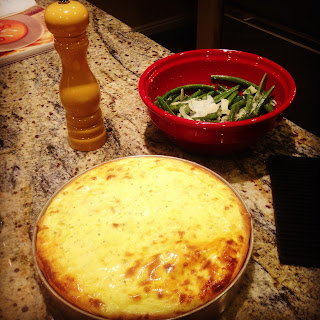 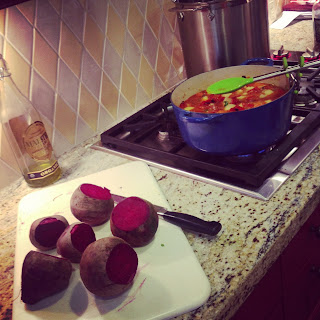 My husband has told me I need to cut back on the cooking because we have so many leftovers.  Cooking for two is so much easier than cooking for one, but there really are a lot of leftovers.  I think he should just take them to his coworkers.  What do you do when you have a surplus of leftovers?