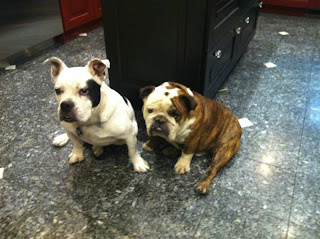 We had Guy's cousin Cooper over for a sleepover: 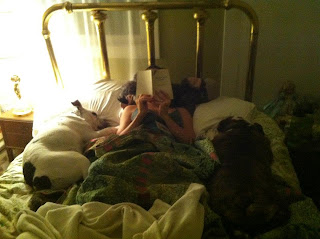 Because, quite frankly, I just don't get enough Coop in my life: 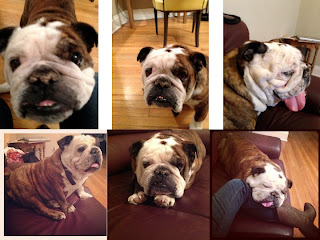 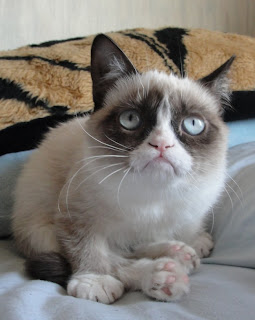 Because it was snowing really hard.  Check out Grumpy Cat... you get new grump on a daily basis.  It is the only thing that gets me going in the mornings.  I HATE MORNINGS!!!  Eventually I got over the morning and took the nerds out to play in the snow.  How I wish I had remembered my camera!  Guy was all over the place and Cooper was plowing tunnels through the snow like a great, fat mole.  The snow was pretty deep and, despite how big he appears, Coop is a bit on the small side.  I was in bulldog heaven x 10!!!  The unadulterated joy on a bulldog's face when he poops in the first snow of the year... well, kids on Christmas morning got nothing on that!

And then I decided we needed to take a photo of this: 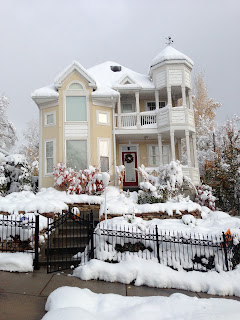 To send to someone beautiful because it looks so damn beautiful.  Can you believe there are houses like this scattered all over my neighborhood?  Few are as nicely restored as this baby though.

And then I was a little sad because I can't have this: 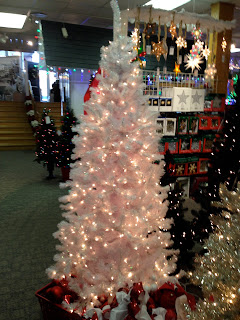 OMGZ!!! "Is that a white IRIDESCENT tree?!?!?", you ask.  Yes.  Yes it is.  And it costs THREE HUNDRED DOLLARS... what the what?!  I mean, I guess over time it would be worth it since we wouldn't need to buy a tree every year AND it comes with all the lights, which are strung oh so perfectly.  At any rate, I went to another store and I found another white tree (not iridescent, but still a real dreamboat) for SIGNIFICANTLY less.  I asked a man at the store if they had more in stock.  He said no, so I went on that they would certainly be getting more in.  Ummmmm... that's when he said, "I doubt it since it's so late in the season."  Dead. Serious.  Also, it was November 8th.  Ree-dick-a-lous.

My husband, who spoils me to death, was willing to buy me the less pricey tree to make me happy, but then I thought, "Screw it.  If they don't have another one in a few weeks, we'll get a regular tree that will make our house smell like heaven.  Woe is me!".  And then I made a bigger donation to the Red Cross. Because Hurricane Sandy was a total dick and there is still a lot to be done.  I mean seriously, I'm still going to get a tree no matter what, so I decided not to be a dick as well.  DONATE Y'ALL!!!

And Merry Christmas or whatever.