Guy is one sick pup: 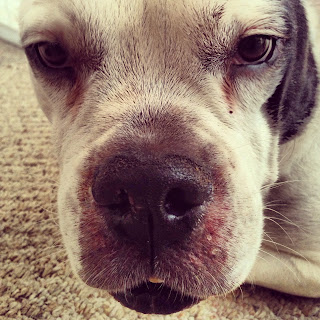 He is all kinds of drippy and goopy and we are definitely going back to the vet tomorrow.  I'm praying with all that I've got in me the vet will know what's wrong instead of having to go through with a double endoscopy- one in each nostril.  I don't want to put him under and this will probably lead to more testing and surgeries.  Pray for us, cross your fingers, wish on an eyelash... whatever it is you do, we could sure use it.

In awesome news, I spent a billion hours getting ready for the Justin Bieber concert last night because I am a cool, confident 30-something who plays by her own rules... or maybe I just REALLY wanted to be picked for "One Less Lonely Girl", which would never happen because my seats weren't THAT good and the other Beliebers prolly think of me as middle-aged rather than a girl. 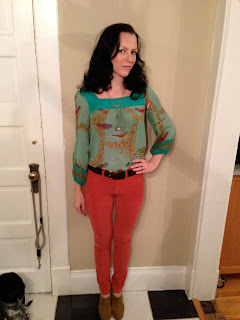 So, yeah, I looked like a mom or something.  Whatever.  Some chick named Amy got the honor:

My seats, excuse me, SEAT, singular, was a lot closer than it looks like and I don't really understand this magical thing called an iPhone 5 that my husband got me for my birthday, so the spotlight was my enemy.  Just listen.  Open your ears to that sweetness.  And then hate on Amy for getting hugs and holding hands with the Biebs.

The concert was amazesauce to the max.  The whole arena was shaking from the screams of teenage girls.  Literally.  The Biebs puts on a serious show.  That kid does not dick around.  Also, he was about 1/2 an hour late because he stopped at Primary Children's Hospital on his way to make the dreams of a little girl with cancer come true.  So much swoon.  I was cool; they were playing Michael Jackson.

And now: THIS WEEK FOR DINNER

Again, I was sick, so not a lot going on in the kitchen.  I did make a really lovely mushroom and dill cream sauce with chicken over spinach fettuccine.  The sauce and my alterations are on my Pinterest.

I feel like I cooked something else in between, but I can't remember.  You won't remember anything after you make this bread anyways.  Why is it that I get sick as hell and all I want is oddles of gooey cheese?

First I made this pesto sauce with the hoards of homemade pesto I have (I canned and froze 120oz of homemade pesto with basil from the farmers' market).  I left out the oil and, obviously, the chicken.  I also added a little extra cornstarch for to thicken it: 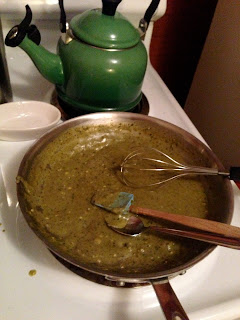 Then I cut a cheap loaf of french bread into a 1 inch grid 3/4 of the way through.  After it was cut, I drizzled sauce all through the cuts: 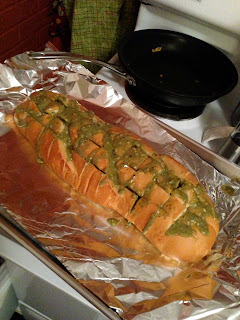 Don't skimp on the sauce.  It's not going to be soggy because you'll bake it in: 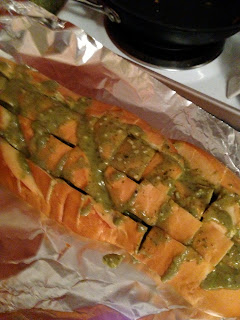 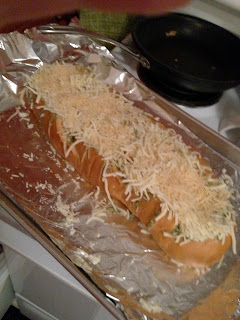 I wrapped the whole thing up in tinfoil and baked it on a cookie sheet at 400 degrees for 20 minutes: 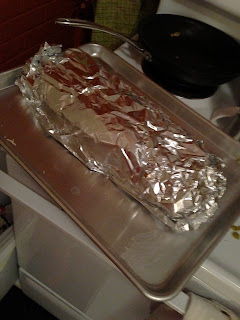 It was sinful and I recommend that you make this when you are forced to share it with several people.  I think I ate over half of it in one sitting: 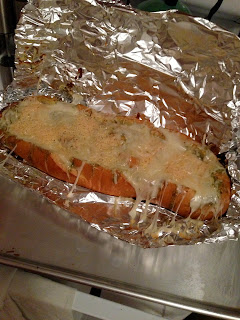 My husband and I dug in before it had even cooled.

Nothing too fancy, but holy-comfort-food-batman!!! 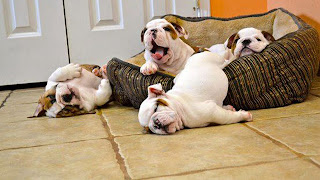