The Every Day Face in Photos... with update 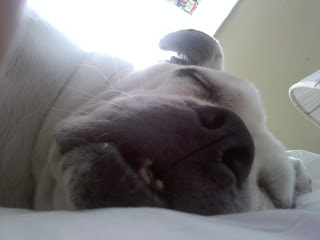 Is what I wake up to most mornings.  Bulldog heaven, y'all.  And then there is this: 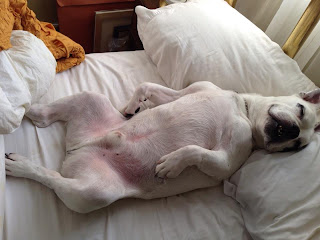 This is a BIG DEAL.  When I rescued Guy he was 3 and 1/2 years-old and he'd been badly beaten as evidenced at his recoils when people tried to pet him.  My poor sugarplum was terrified of being hit and/or kicked.  Now this big, o'l manly baby feels safe enough to sleep with his belly exposed!!!  Seriously big  dealio.

Speaking of faces, I took step-by-step of my "every day face".  The photography still leaves a lot to be desired, but we're getting better up in this piece.  I, like, so totally have camera+ on my iPhone or whatever (I still don't understand this damn fancy phone).  Let it be known how much I love and adore you, dear reader.  Here comes a series of photographs of my unsightly, 3-mile-long face with a lazy-looking eye and a forehead that rivals Tyra Banks *chokesonsobs*.  Also, my hair was totally flat, so, yeah... here goes (because I care!): 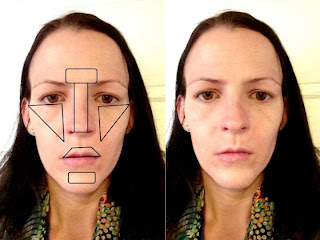 This is me with just Benefit's Erase Paste on for concealer and contouring.  I also put a little around the edges of my nostrils, but there wasn't a "shape" available to illustrate this.

Next I apply Benefit's Ooh la Lift like so: 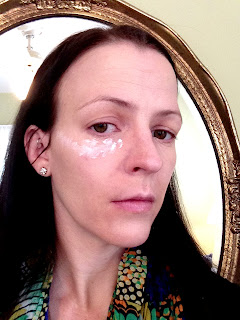 Then I I dab it in to my skin softly with a finger, follow with the next under eye and cheek bone, finally dabbing it along the top of my upper lip: 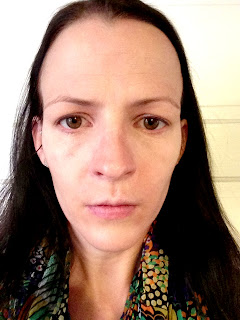 This I follow with Chanel's Natural Finish Loose Powder: 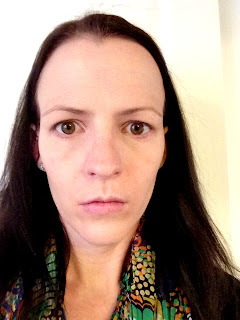 Next I hit up my pink Chanel blush and eyebrow powder, both of which I acquired in the '90s.  Before you chide me on expiration dates and sanitation, tell Chanel to STOP DISCONTINUING THE THINGS I LOVE *weep,sigh,moan,lament*!!! 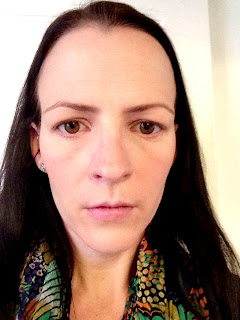 I use more blush than I could get the photo to show.  I like a rosey-ass cheek, but I do not verge on clown despite my husband's pleas... ha!  Thanks to my new find, I can follow up with Chanel's Illusion D'Ombre cream eyeshadow, which is way dreamier than this photo depicts: 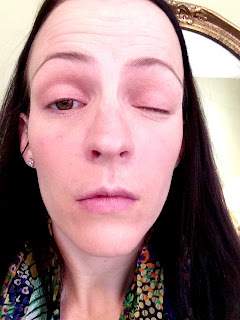 Then I curl my lashes and hit them up with three separate products.  Diorshow Maximizer and two coats of L'Oreal's Voluminous Million Lashes Waterproof Mascara on the top lashes and Clinique's Bottom Lash Mascara for the bottom lashes... duh.  Lastly, I slap on another discontinued Chanel product I like to call "an awesome shade of shiny lipstick": 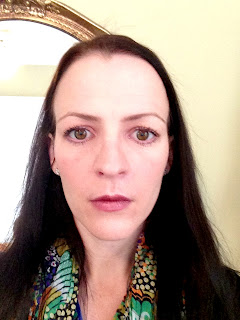 And there you have it, folks.  After posting all these pics I kind of feel like I should change the name of this look from "Every Day Face" to "Less Dead Face".

Let's wrap it up (a day late and several million dollars short or whatever*):

THIS WEEK FOR DINNER:

Monday: Homemade italian wedding soup that was insanely good... in no small part to going crazy with the fresh dill.  I halved the recipe, but made the full batch of chicken meatballs to use for another dinner.  Unfortunately the butcher at my neighborhood grocery is about 1,000 years old (but just as sweet) and he could not comprehend that I needed uncooked chicken sausages removed from their casings.  After much stress I left with fully cooked chicken sausages.  Try to remove the casings from those babies.  It's like an hour of carpal tunnel and enough cussing to make a sailor blush.  Follow that with having to slice all the sausage into VERY tiny pieces and you've got yourself 40 rage meatballs... they were still totally delicious after my rage subsided. 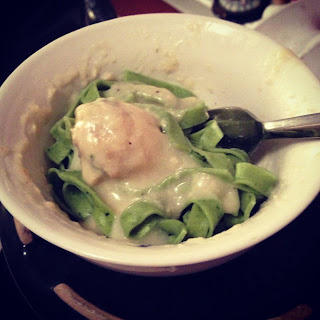 Wednesday: Buffalo chicken "egg rolls".  Seriously, these are SO good.  I should have whipped up some ranch dressing powder mix with greek yogurt and skim milk instead of the lowfat dressing from the store, but I'm not a wizard.  I'm lazy and exhausted.  More salad with greek dressing... this is my go-to "vegetable" lately. 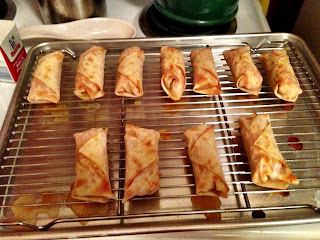 Thursday: We ate salt.  Just salt.  Ok, MOSTLY salt.  It wasn't delivery, y'all... it was DiGiorno and it was disgusting.

Friday:  We hit up Bombay House for some serious Indian deliciosity.

Saturday: Fend for yourself because I had to work.

Sunday: As further proof that my mother hates me, she made a shrimp pasta.  I am super allergic to all fish, but especially shellfish.  Luckily, I don't go into anaphylactic shock, but I get very serious (and unbelievably painful) food poisoning.  There was also a kale and radish salad that was pretty good.

So, that's about it... I gotta haul ass to Xtend Barre... I mean I literally have to lug my big bum to class.

*UPDATE:  So, y'all know that I have been working on Guy's Look Book and it's awesome and gender-bending and Guy is the dreamiest dog of all the dreamy dogs who ever dared to dream.  TALK ABOUT BEING A DAY LATE AND SEVERAL MILLION DOLLARS SHORT:  THIS just popped up on the interwebs. *itgivein* *headdesk* *weep,moan,sigh,lament* *shakesfist* *moretearsitis* etc., etc.
Posted by Mrs. Roger Federer at 2:56 PM