So, I know I haven't been present on this blog for a long time and I am basically using this URL- for the time being- to update those concerned about Guy.  If you are not a Facebook "friend", or a personal friend then here's the short of it: Guy was given a death sentence called lymphoma.  We are trying to defy that sentence as long as we can (we are fighting 0-2% chance of actually being cancer-free), which means that currently we are immersed in chemo.  That is my life right now.  Cancer is my life.  Don't get me wrong... life is still wonderful, but it's shit as well.  A whole new brand of turd.  Cancer is cancerous.

Some of you may know that in late October Guy received his first dose of doxorubicin, which is one of the medications he was supposed to receive with his chemo.  He had a severe and life threatening reaction to the drug that left our babe in the ICU for ~30 hours and mama still hasn't fully recovered.  But he's a tough little bug and he bounced back like magic.  Within a few days of the reaction his white blood cell count was back to 100% and, a week after that, so were his platelets.

This past Wednesday we were scheduled for another dose of doxorubicin, but we consulted with our oncologist about giving a lower dose, or using an alternate drug.  After I posed the question whether we would be lowering his chance of actually kicking the cancer (as opposed to temporary remission) with the alternate drug, we decided on a third medicine and he has been handling it gorgeously.

We have had to keep him on a "bland" diet to avoid serious nausea.  My attempts at re-introducing his dry food in small doses was not going over well.  I alternate brown rice with boiled chicken and half a can of "bland" wet food (the latter is necessary to get his veggies, calcium, etc... the former two are mainly for fiber and weight gain) with plain oatmeal, boiled chicken and the other half of the wet food.  He has to be fed by hand to control the pace and thereby controlling his nausea.  I strongly recommend this diet to anyone who is, or who will go through this hell.  It has kept our babe stable and comfortable.  He is almost always happy as evidenced below. 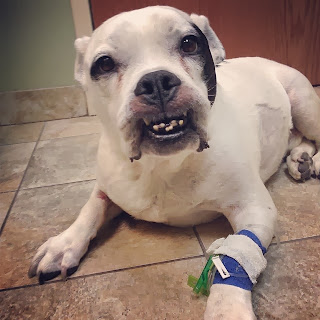 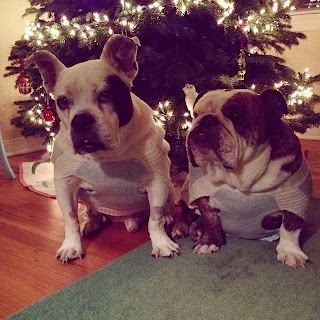 The kids in their Christmas sweaters in front of the tree.  Guy tolerates his and Cooper LOVES his.

Happy Holidays, y'all.
Posted by Mrs. Roger Federer at 8:50 PM